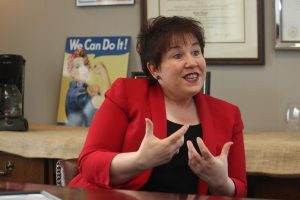 Lisa A. Coppola refers to the Buffalo Niagara chapter of the National Association of Women Business Owners as a “best-kept secret.”

Based on how the chapter’s membership has increased, word seems to be getting around.

The local NAWBO chapter was named the fastest growing in the country last year, out of 54 chapters. It recently passed the 100-member mark.

Coppola’s first exposure to the group was when she accepted an invitation to speak to its members; now she is the chapter’s president.

Coppola was previously a lawyer at Hodgson Russ, then helped found and grow what was then known as Rupp, Baase, Pfalzgraf, Cunningham & Coppola, before selling her interest in 2014. During a yearlong sabbatical, she bought an interest in the English Gardener, a garden design firm.
Coppola then launched her own Amherst-based boutique law firm. Through NAWBO, she wants to help other women entrepreneurs tap into their potential.

Q: What is it like to have your own law firm, compared to being part of a larger one?
A: It has been a real eye-opening, exciting experience. Of course, I had autonomy at both former practices as an owner there. But to really steer the ship on my own and give a lot of thought to what clients need, I felt it’s been a huge responsibility but an incredible blessing.

Q: How has the local NAWBO chapter managed to grow so fast?
A: My predecessor, a woman named Sabina Ramsey, she’s a branding and marketing guru with a company called Insight International. She felt very strongly about embracing the diversity of our community. That was something I also felt very strongly about.
And although we come from very different professional backgrounds, and even culturally – Sabina is an immigrant from Sweden – we collaborated in a very powerful way, I thought. And together with the woman who will become president (in June), Marcia Brogan, we developed a program we simply called, in a very basic sense, “Warm and Welcoming.” Our focus was, we need to be out in the community. NAWBO is one of the best-kept secrets in Buffalo for women entrepreneurs. We need to let women, and men, know this organization is here, it is supportive, it’s inspiring, it fosters collaboration and cross-marketing.

Q: What kind of growth potential is there for women-owned businesses around here?
A: Sometimes, typically we might think about the woman who runs a business out of her home, because she’s trying to balance a family, raising children and things like that. We also ought to keep in mind the fact that we have women running multinational, multimillion dollar companies in this region, and women who have been in business 30, 35, 40 years. I have a colleague on our board who runs a multinational company out of Tonawanda, and she (travels to) Asia, and it’s just fascinating to think about, here we are in the Buffalo Niagara region, but our reach is so much farther.

Q: What do members get out of the group?
A: What’s deeply satisfying is being able to see women support each other and learning that they are not alone in whatever the challenge might be in their business or organization, and then getting sparked by the ideas of their colleagues. They don’t need to be in the same industry – they can be. I’ve worked really hard at bringing in women attorneys to the organization, for example,  lawyers who own their practices, because I think we’re better collaborating. There needn’t be a place for competition. There is more than enough work to go around in our region, and we’re all stronger collaborating, welcoming our colleagues and our competitors in.

Q: Where can the chapter go?
A: We are shooting to grow by another 50 percent in the next three years. So we intend to be 150 members by 2020. And we think that’s more than possible. In fact, it’s quite likely, and some might argue that it’s Lisa being conservative again, that we can double it. Because from 2015 until now, we doubled our membership. We were around 50 members when I first came on as president-elect.
It has a lot of women involved, but we are very busy and very focused on our businesses. Many of us (have) families, as well. And then there’s community service, whether it’s this organization or serving on boards. What I would love to see in our community is a recognition of the power and the wisdom of our women entrepreneurs finding their way onto for-profit boards in greater numbers and on meaningful community boards that drive the economics of this community forward.